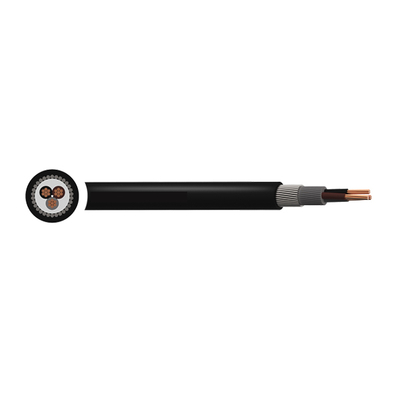 The wider LV armoured cable range also includes power cables NA2XRY & NA2XRH with a voltage rating of 600/1000V and cables with armoured protection for specific applications such as traffic signalling.

The range of hard-wearing steel wire armour (SWA) and aluminium wire armour (AWA) XLPE insulated cables is manufactured in accordance with IEC 60502 and is designed for use in applications where there is a risk of mechanical stress and where protection is required against mechanical damage. It is commonly used for the supply of mains electricity and for auxiliary control cables in diverse environments including aerial power networks, outdoors, indoors, underground systems and in cable ducting. The SWA armour means these are direct burial cables - suitable for installation directly into free draining soil as they are protected from damage should be they accidentally hit. These cables are suitable for use clipped directly onto a surface, on a tray, in a basket or in free air.

This range of low voltage armoured cable is often referred to as mains power cable, mains armoured cable, booklet and non-booklet armoured cable. The single core cable is armoured with aluminium wires (AWA) to prevent induced current in the armour. The 3 core cables, 4 core cable, and other multicore versions are armoured with galvanised steel wires (SWA) and are available in a wide range of cores and conductor sizes. This range of XLPE insulated cables is available with a UV-stable PVC outersheath or with low smoke zero halogen (LSZH sheath) properties for applications where the emission of smoke and toxic fumes could create a serious threat to life and sensitive equipment in the event of fire.

As a leading booklet cable supplier, this range of armoured power cable is available with an MDPE outersheath instead of PVC for greater resistance to abrasion and water, It's construction then becomes XLPE/PVC/AWA/MDPE.

This range is also available with an MDPE outersheath, as part of our extensive range and as a leading mains cable supplier.

When exposed to fire, the LSZH materials emit very low levels of smoke and non-toxic levels of halogen gas (typically under 0.5% HCl emission)

The sizes below are the most commonly used XLPE booklet, non-booklet and mains armoured cables:

As an XLPE cable supplier, we also have a complementary a range of quality cable accessories including SWA glands, terminations, clips and cleats designed and tested to ensure perfect fit with our cables. See the technical datasheets for more information including BS6724 and BS5467 cable ratings and SWA cable sizes, or discuss your application and specific requirements with our technical engineers.