Cold Impact Testing is conducted according to international standard IEC 60811-506, and is designed to assess the performance of electrical cables at low temperatures. The test is carried out on samples of cable insulation and sheathing material but no less than 16 hours after the extrusion or cross-linking process has been carried out.

The cold impact cable test methodology requires a low temperature chamber capable of maintaining the specified test temperature and bending apparatus as described in IEC 60811-506. The test requires three pieces of complete cable, each having a length at least five times the diameter of the cable with a minimum of 150mm. The test apparatus (shown below) is placed on a pad of sponge rubber about 40mm thick and held in the low temperature cabinet before and during the test. 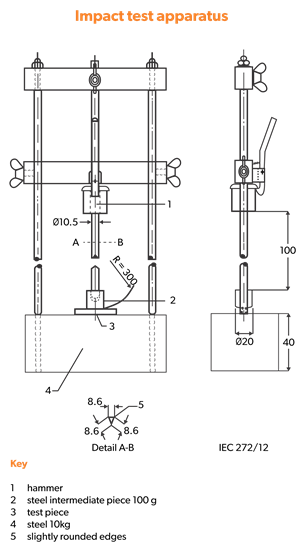 Cold Impact cable testing on power cables for fixed installations specifies the mass of the hammer for testing the samples as not being less than the values as given in Table 1.

Table 1 - Mass of hammer for power cables in fixed installations

Whilst the mass of the hammer for cold impact cable testing for flexible cables and telecommunications cables shall not be less than the values shown in Table 2.

Table 2 - Mass of hammer for flexible cables and telecommunications cables

The apparatus and the pieces of cable to be tested are placed side by side the low temperature cabinet which is maintained at the temperature specified in the standard. The contents of the refrigerator shall then be allowed to cool for a minimum period of 16 hours. If the apparatus has been pre-cooled, a shorter cooling period is permissible, but not less than 1 hour, provided that the test pieces have attained the prescribed test temperature. At the end of the prescribed periods, each piece in turn shall be placed into the cold impact test apparatus and the hammer allowed to fall from a height of 100mm.

To be compliant with and pass the Cold Impact Test, the cable insulation or sheathing material must not show any cracks when visually inspected without magnification.